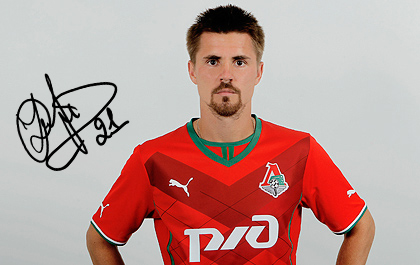 Dmitry Torbinsky was born to a labour family in Norilsk, the industrial city beyond the Polar circle where cold winters of -50 centigrade last for half a year. Sun is barely seen there, and steel plants' emissions paint the white snow black.

Since childhood Dmitry went in for futsal, guided by coach Leonid Gavrilov. As for the football theory, Dmitry's father Evgeny educated him, too. He always took Dima with him to the training sessions of a local factory team. A famous futsal goalkeeper Andrey Tveryankin says when Dima was 12, he easily feinted several grown-ups on the spot. The slender boy had great sprinting abilities, fine dribble and many other advantages.

Besides being a football talent, Dima attended a music school where he was one of the best pianists.

But football won. In 1996 the Torbinskys brought their son to Moscow for a test at the Spartak Soccer Academy. It took coach Evgeny Vorobyov just half an hour to say: "Accepted!" Then there was academy routine, first games with the second team and admiration of the legendary Oleg Romantsev. In 2002 Torbinsky made his first appearance in a Champions League match and the Russian Championship, challenging the Red-Whites' best players.

But there the white stripe ended. Serious injuries didn't allow Dima develop his talent fully, and while being sidelined, the vacant position was taken by other candidates. Season-2005 Dima spent on loan in FC Spartak Chelyabinsk, where he had enough playing time and got valuable life experience.

Season-2007 has been his best. He became a starter in Spartak Moscow, became a leader of the squad and made his way to the Russia national team.

His move from Spartak to Lokomotiv was one of the biggest transfers in 2008.