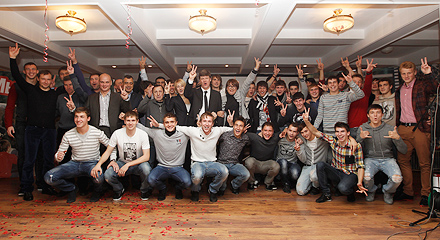 - Dear friends! I`m happy that Lokomotiv for the first time in it's history has won the Russian youth championship. I hope that youth tournament won`t be abolished and in future we will fight for the first position only as well, - said Olga Smorodskaya. – I wish you won`t catch the star disease and will continue to improve your skills. We always follow you very attentively and hope that reinforcement for Lokomotiv will come exactly from youth team. From the heart I wish you a good luck!

Alexei Smertin has wished to players to continue their growth as well: "This win is a small step towards a big goal – to play on high professional level in the main squad of Lokomotiv. Be exacting to yourself, perfect yourself! Only on conditions of permanent growth our club will win more trophies".

Jose Couceiro has congratulated the team as well.

- Congratulate you with the victory of the tournament! My congratulations for all people who are here: for president, for coaching staff, for players, for the whole club! I`m sure that work with youth team is a very important part of success. When we start to build a new house first of all we have to make a stable foundation and only after to build a roof. You are the future of Lokomotiv! And today I wish you as many wins in the future as its possible, professional growth and don`t forget that the most important in football is a team, the whole team on the pitch and outside the pitch as well, - said Couceiro.

Head coach of Lokomotiv youth team Vladimir Volchek has thanked everybody for congratulations and pointed out that it was impossible to achieve so good result without devotion and concentration:

- From the beginning honesty was an our credo: honestly work on trainings, honestly work in a usual life, honestly struggle. It`s very important that we were frank with each player in the team – this method brought us the win. I thank players for devotion and the club management for comprehensive support! We are the champions!

All winners were gifted by presents from Football club Lokomotiv – iPad2. Then players sang the song “The team of our youth” and immortal “We are the champions”. In the end of the festive evening there were cake with firework, confetti and joint singing of karaoke.