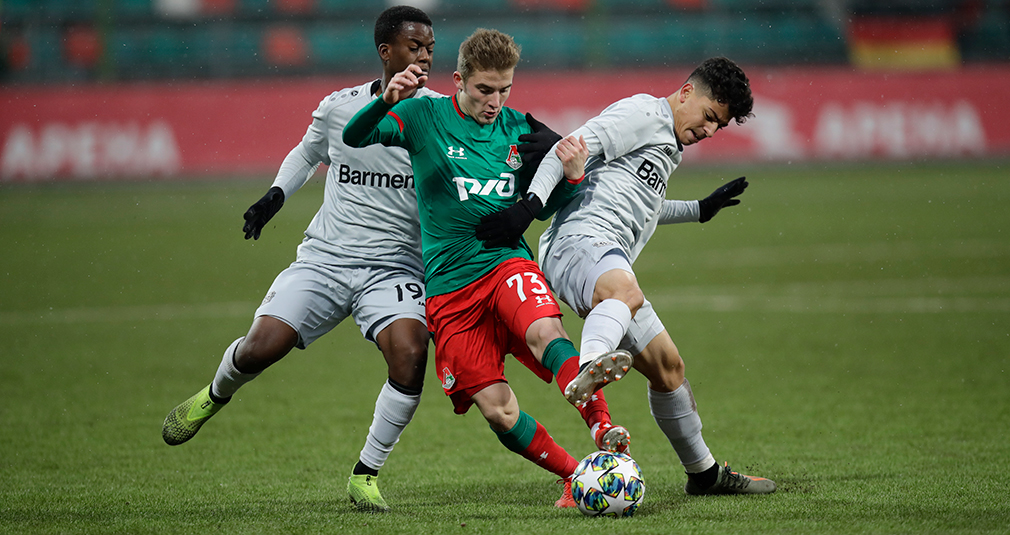 After a defeat at the hands of Juventus in round 4 of the UEFA Youth League Lokomotiv put itself on the brink of being kicked out of the tournament. To keep chances for advancement from the group, we had to beat Bayer, follow the Juventus vs Atletico fixture, and then defeat the Spanish side in the closing game.

Lokomotiv could have opened the score in the fourth minute when Bayer's defender made reckless pass to his goalkeeper. Iosifov picked up the ball and took a shot at the goal from about seven metres but missed.

Lokomotiv wasted their next opportunity in the following offensive. Mukhin had a first-touch try following a cross from Baraboshkin but failed to boot it properly. Then, Iosifov organized a third opportunity - Nikita entered the box from the left flank and crossed into the goal area when it was cleared by Bayer's defenders.

The visitors managed to push the epicentre of the action away from their goal close to the end of the first half. In the 35th minute it was Botnar's turn to save his team, which he did in style, blocking an attempt by Anapak-Baka from a free kick.

In the second half Lokomotiv kept building on pressure and eventually earned a penalty. One of multiple crosses into box resulted in a foul at Khlynov, the referee pointed at the spot, the penalty kick was effectively converted by Petukhov.

Bayer responded in ten minutes. Anapak-Baka crossed into the box from a free kick when no one was eventually able to reach the ball - neither the defenders, the attackers, nor Botnar.

Having conceded a goal, the Railroaders had to open up, and Bayer were quick to use their chances. Fesenmeyer sent it home after a rapid counter, and improved the lead in the injury time, scoring a brace.

Lokomotiv has lost any chance to qualify for the play-offs. The closing game with Atletico on December 11th will have no tournament importance.