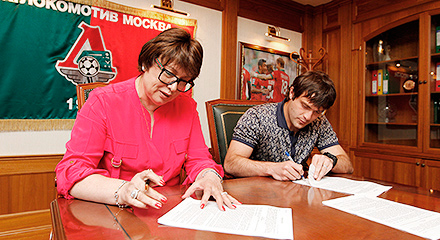 Head of Selection Department at Lokomotiv Kirill Kotov has commented on the choice of the 28-year old player:

- One of our priorities was to strengthen attacking. Kasayev is able to play equally well on both flanks and he indeed can help us. It is also important that he is an experienced player, a Russian champion. I am sure he will bring in strength and variety to our attacking potential.

Alan Kasayev was born on April 8, 1986 in Tursunzade, Tajikistan. Soon his family moved to Vladikavkaz.

Alan's first professional club was Titan Reutov where he made 14 appearances.

Soon the young player caught an eye of many Premier League clubs' scouts who first took him to Shinnik Yaroslavl and then to Zenit Saint Petersburg. In pursue of more playing time Alan joined FC Kuban in 2008. There he really made his name. Next year the club from Krasnodar earned a level-up and in 2009 the midfielder finally had a chance to show himself among the best.

Attracted by Alan's outstanding performance the Russian champion of the time Rubin Kazan offered him a contract. That year the skilled midfielder helped Rubin win their second title.

At Rubin, Alan played in more than 100 matches before a loan to Dinamo Moscow where he made 20 appearances.