Lokomotiv and Zenit played to a 0-0 draw 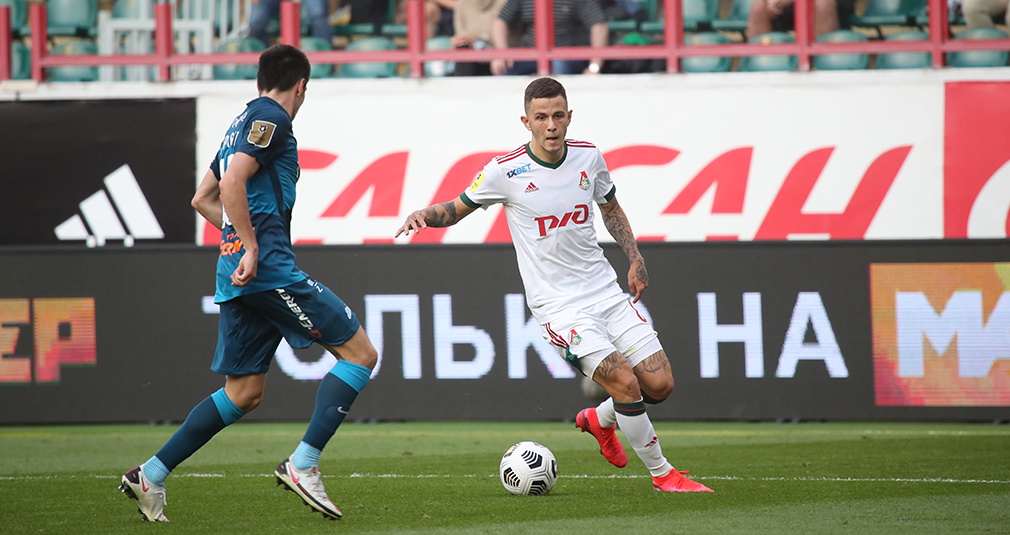 Before the game against Zenit, Lokomotiv lost another player. Krychowiak joined the list of injured players. The coaching staff decided to replace Krychowiak with Kulikov, who together with Magkeev formed a partnership in centre of midfield. The back four was the same as in previous game and in attack Nikolic picked Smolov, Anton Miranchuk, Kamano and Rybchinskiy. Zenit had a few selection problems as well. Driussi was out with an injury and Wilmar Barrios was suspended.

Before the match Dmitri Barinov, who has recently undergone cruciate ligament surgery, recorded a video message for the team and fans. The fans also wrote some warm recovery wishes to Dima on the poster on the main square in front of the stadium, while the South Stand put out a banner before the game in support of Bara.

The fans also greeted Lesha Miranchuk, who watched Lokomotiv's game from the stands.

Lokomotiv scored an early goal on the 10th minute. Smolov passed the ball to Rybchinskiy into the penalty area, and Dima hammered the ball into the top corner. The referee went to watch the replay, which showed a microscopic offside.

Despite the fact that in the first half the teams played at good speeds and actively attacked, there were practically no dangerous chances near the goal. Only in the middle of the first half Lokomotiv and Zenit exchanged chances.

Corluka intercepted Dzyuba’s pass in the penalty area and made a great long ball to Smolov that put him in good position. Fedor moved away from Lovren and shot into the near corner - Kerzhakov made the save. It was the only shot on target from both teams before the break.

A couple of minutes later, Zenit got a free kick 27 meters away from the goal. Lovren shot went perfectly over the wall, but the ball went a little bit wide.

During the break, the footballers of the beach Lokomotiv entered the field. A few days ago they became the champions of Russia for the fifth time in their history, after beating Spartak in the final. There was small celebration ceremony to recognise their achievement.

At the beginning of the second half, Zenit's goal was disallowed. Dzyuba put the ball into the net after Karavaev's pass, but before he did it, he touched the ball with his hand. After this Zenit did not make any shots on target.

On the other hand, Lokomotiv was getting closer and closer to the goal as the game was progressing. Anton Miranchuk had a chance after he moved from the wing to the centre and shot into the far corner - the ball went near the post. A few minutes later Miranchuk found Eder in the box, but his header went above the bar.

Lisakovich had the best chance in the game to score on 83rd minute. Anton Miranchuk made a good low cross into the box, but Lisakovich missed the ball by a few centimetres.

Zenit again failed to beat Lokomotiv at the RZD Arena. This was the last game before the international break.

And after the match, Lesha Miranchuk announced what had been discussed in the press for so long - he is very close to join Atalanta.