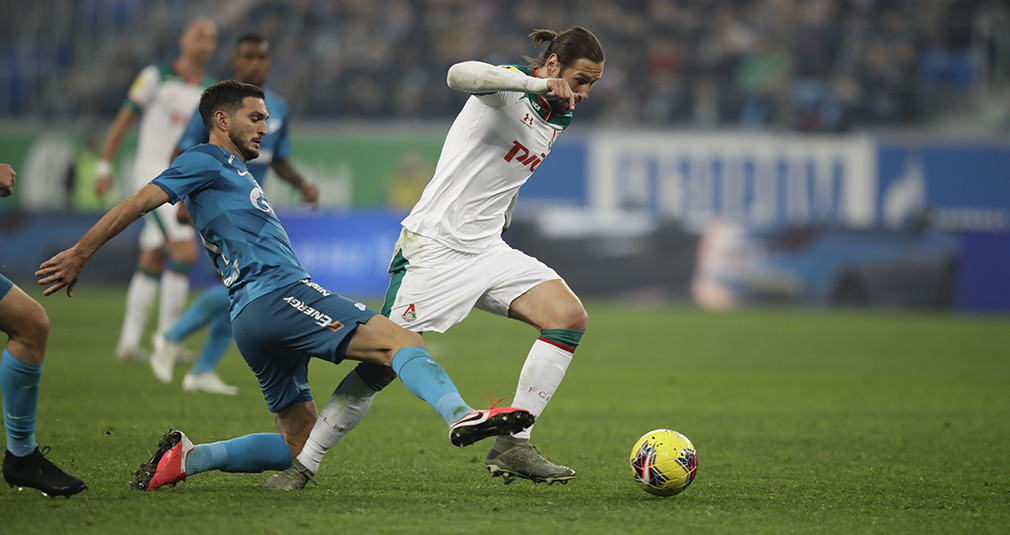 Both Lokomotiv and Zenit had their sickbeds occupied. The Railroaders are looking forward to the recovery of Farfan and Anton Miranchuk, while Rybus was sidelined due to aggregated yellow cards. Zenit had to cope without the injured Dzyuba, Shatov was not even registered, while Azmoun felt sick and remained seated. Lokomotiv chose to cover the left flank with Hoewedes, fill in defensive midfield with Magkeyev, while Eder spearheaded attack. Zenit featured Malcome among the starting XI.

The first half saw almost no opportunities and definitely no attempts on either side. By the 10th minute Zenit’s doctors appeared on the field twice to help Driussi and Douglas Santos who suffered in aerial duels with Barinov and Miranchuk.

Syomin fired up the game in the 14th minute. The coach didn’t like when the referee booked Hoewedes for tackling Malcom. Yevgeniy Turbin was not impressed and booked Syomin. Even Krychowiak came up to calm him down.

Lokomotiv’s fans immediately started chanting and singing songs to the glory of the coach, and did it well - with some 2,600-strong crowd, this was the most numerous Red-Greens’ support’s travel to St Petersburg

Another eruption of anger happened on 38 minutes. The ball crossed the touch-line not far off our penalty area, the Railroadrs considered it theirs but it was thrown in by Zenit. Malcom immediately set up for Yerokhin who hit the post. This time Turbin issued a yellow card to Guilherme.

After the break Zenit took the initiative. In just 15 minutes they had seven attempts, while in the entire first half they made only six. Guilherme saved a ricochet after Malcom’s attempt, Sutormin had a go from within the penalty area, Yerokhin sent the ball above the crossbar from a promising position.

Lokomotiv defended and waited for a chance but Zenit cut short all opportunities for counter-attacks. Nevertheless, the Railroaders had a chance to claim a victory when Miranchuk tried to chip Lunyov but the keeper managed to tip it away.

Round 20’s top game resulted in a goalless draw.