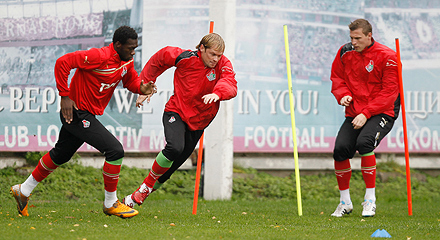 On Friday railwaymen had a training in Bakovka. In the training didn`t participate midfielder Dmitriy Torbinskiy, continuing to restore after injury, and goalkeeper Alexander Filtsov who had got hip injury in the game against Luch and according to doctors` forecasts will miss about three weeks. Dmitriy Tarasov, who hadn`t felt quite well, missed the training as well. Jan Durica trained in the common group, however his participation in the game against Rubin is still under the question.

Railwaymen continue to live on a schedule two games per week. Such schedule will have been keeping till the beginning of October, when the break for national teams games will happen. However players don`t complain about such tough schedule.

- It`s always better to play, than to train, so two games per week is a quite normal tempo, - says midfielder Magomed Ozdoev. – Though our trainings are very interesting, so every day we work with a big desire.

- Which thoughts you have before the match against Rubin?

- Rubin is a very strong team, they had worked quite well in transfer market in summer. I`m sure we are expected very difficult match. It even seems to me that game against Rubin will be more hard than against Zenit. Rubin lost two last matches in the Championship and third defeat doesn’t`t figure in their plans obviously. However we think only about the win as well – we have to catch up leaders.

Nigerian forward of Loko Viktor Obinna is confident as well, that on Sunday team is expected a difficult match.

- Rubin is our direct competitor and I expect very persistent game, - says Obinna. – For us such games as on this Sunday is an excellent possibility to show, on which level we are now. It`s pleasure that the gap between Lokomotiv and top-3 have become shorter after last matches. However there is no sense to think a lot about it now – Championship will be finished only in spring. The most important for us is to show a good football and to win.

On Sunday, by the way, Obinna will definitely meet on the pitch in Cherkizovo his compatriot and team mate in Nigeria national football team Obafemi Martins.

- Martins is a very good friend of mine, - has told Viktor. – When I left Nigeria and moved to Inter Martins had been already playing in Milan`s club and very helped me with adaptation. We are always in touch with him. Though last time we got in touch on the phone because of sad occasion. Martins lost his brother and I gave a call to him to support. Unforunately on Sunday I doubt we will have a time to chat. Considering that Rubin also plays in the Europa League, they surely will fly home immediately after the game.
Before the match against Rubin railwaymen will have one more training on Saturday. The match will take place on Sunday and the kick off is at 18:30.

Photo report about the past training you can find in a section Photo.