Jose Couceiro: “It`s important to be able to endure and to remain calm” 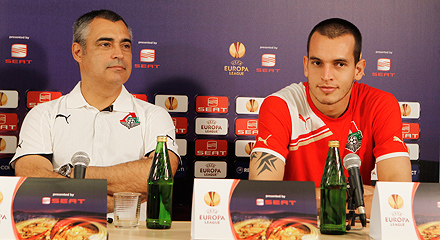 Today Lokomotiv had a training in Bakovka before tomorrow`s game of the UEFA Europa League against Anderlecht. Before the training head coach of Lokomotiv Jose Couceiro and goalkeeper Guilherme had shared their thoughts about the forthcoming match with journalists.

- Jose, your Russian career has been going very successfully. Do you have a special talisman? – question for Couceiro.

- It`s a big mistake to explain wins by luck. The guarantee of success is a confidence of players in themselves. We aren`t afraid to loose when we go into the pitch. Though it must be admitted that Anderlecht is a favourite of our group.

- You call Anderlecht a favourite because you want to lull their vigilance?

But it doesn`t mean that we will play for draw in the home game. We always think about the win, with any opponent. On Thursday it will be the same. Any match starts from 0:0. And we will start with 11 players, the same as our opponents. It`s important to be able to endure and to remain calm in any situation. I think emotional mood of players and their concentration for the match will determine a lot in tomorrow`s game.

- The last meeting of Lokomotiv with Belgium club had finished sadly for the team: Lokomotiv was defeated by Zulte Varegem and then cadre changes had happened. Will you remember that game?

- That defeat hasn`t to influence on tomorrow`s game. It will be another story. Tomorrow we will play on our home stadium and we will be supported by our fans. I particularly want to mention Lokomotiv torcida. Our supporters are always with us and very help to the team. It`s the additional power which can become our trump.

- Have you already decided who will play in attack: Caicedo or Sychev?

- Different options are possible. But we will definitely play with threes strikers tomorrow.

Goalkeeper Guilherme had shared his opinion about forthcoming game as well.

- Anderlecht is a strong team, but we mean to win, - said Guilherme. – Concerning my health, there are now problems and I`m absolutely ready for the game. Physically I feel myself for 100 percent.