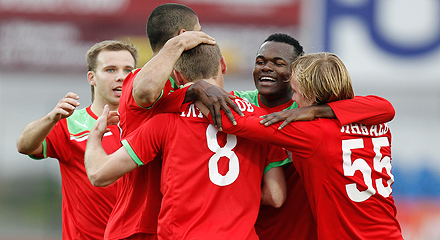 All last week it was raining in Kabardino-Balkaria, so the pitch on Spartak stadium has become terrible.

In the first part of the first half it was an equilibrium. The most dangerous episode happened on 18th minute, when Burlak interrupted the attack of home team by foul near the line of penalty area. But Spartak didn`t realize its chance: Koncedalov kicked too far from the goal.

Railwaymen spend a lot of time on Spartak half of the pitch, however it was very difficult to create near Fredriksson goal: the ball jumped on the pitch and didn`t let contrive normally.

On 35th minute Spartak got another free kick. Koncedalov kicked to the frame, but Gridnev forwarded the ball to the net.

In the half time Joce Couceiro decided to reinforce the attack and substituted defensive midfielder Stanislav Ivanov by striker Felipe Caicedo.

Ecuadorian forward could score the goal in 2 minutes after his appearance on the pitch. He run one on one with Fredriksson, but was knocked down by Nalchik defender. However referee`s whistle kept silent.

On 60 minute Bezborodov had another occasion to show on eleven-meters kick. After Obinna`s lob the ball touched the arm of Spartak defender, but referee hadn`t found the foul in this episode.

Lokomotiv had been attacking till the last minutes and finally wrested the win. Jan Durica, who appeared on the pitch on 86th minute, forwarded the ball from the chaos in the penalty area of home team to the net. 2:1 – volitional win of Lokomotiv!