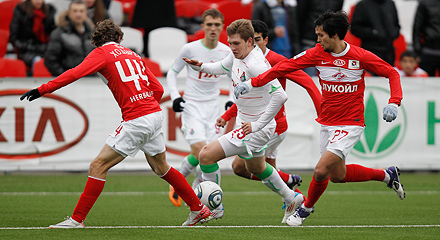 Spartak had captured the initiative since the kick-off. The first scoring chance near Lokomotiv goal happened on 12th minute, when Evgeniy Bodanov let the ball out from his hands and it touched the post.

Home team had missed a few more scoring chances, when on 23rd minute they finally scored. Obuhov was sent away with a deep pass, faced one on one with Bodanov and forwarder the ball to the net.

The period from 36th to 42nd minutes became absolutely disastrous for railwayboys. During this period Spartak scored three more goals and settled the question about the winner of the game.

The second half was a mere formality.Both teams made a lot of substitutes, but didn`t score goals.

This defeat very complicates for railwayboys the struggle for the first position. The fate of champion`s title will be solved in the last matchday, which will be played on 5 November.