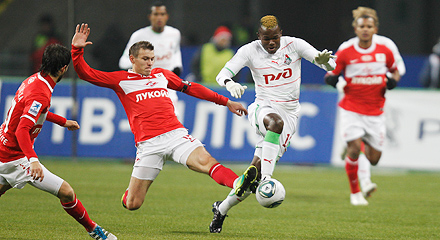 The beginning of the game was discouraging for Lokomotiv. The best player of the match – Nigerian striker Emanuel Emenike – scored two goals during the first fifteen minutes.

Railwaymen had come to themselves in the middle of the half. On 20th minute Roman Shishkin and Denis Glushakov played the free kick adroitly, but the ball had flown above the horizontal bar.

In the second part of the half Spartak didn’t have such an obvious advantage and Lokomotiv had chances to cut the gap. However Vlaidislav Ignatiev didn`t score from good position and Viktor Obinna in the same attack was knocked down in the penalty area by Spartak defender, but referee hadn`t whistled.

The second half started like the first one: Emenike scored his third goal.

After that the game had become quiet. Lokomotiv had been trying to score, but Spartak defense was very solid.

In the last ten minutes two more troubles happened with railwaymen. Firstly Jan Durica injured his head in the air fight with Sukhi, and secondly Obinna was turned out of the pitch for two yellow cards.

It`s the first defeat of Lokomotiv with Jose Couceiro in Russian premier league.