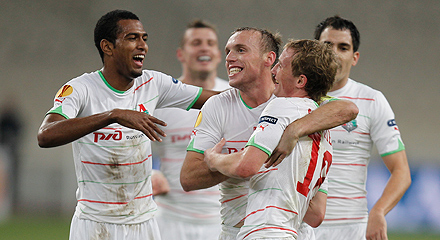 The first half wasn`t very attractive. AEK didn`t have real scoring chances, while “railwaymen” created a few moments. On 14th minutes Denis Glushakov passed the ball to Dmitriy Torbinskiy, who faced one on one Arabatzis but didn`t score. Seven minutes after Glushakov made a very good pass to Torbinskiy again, and 21st number of Lokomotiv passed the ball to Viktor Obinna, whose kick was blocked by AEK defender. And Roman Shishkin, who was the first on the ball after rebound, didn`t score as well – Arabatzis rescued his team again.

The referee added three minutes to the first half, and these minutes became the best for Lokomotiv before the half-time. However Vladislav Ignatiev Ignatiev and Seniyad Ibricic didn`t score their chances.

In the beginning of the second half Lokomotiv had scored finally. Obinna passed the ball to Glushakov, who forwarded the ball to the net in one touch! His another goal Glushakov had celebrated by acrobatic roll as usually.

However on 72nd minute Lokomotiv scored again: Maicon punished AEK goalkeeper, who dribbled the ball in the penalty area. And Ignatiev on 80th minute put the final point and scored the third goal.