Left everything on the pitch, but didn’t get anything in return! Lokomotiv lost to Bayern 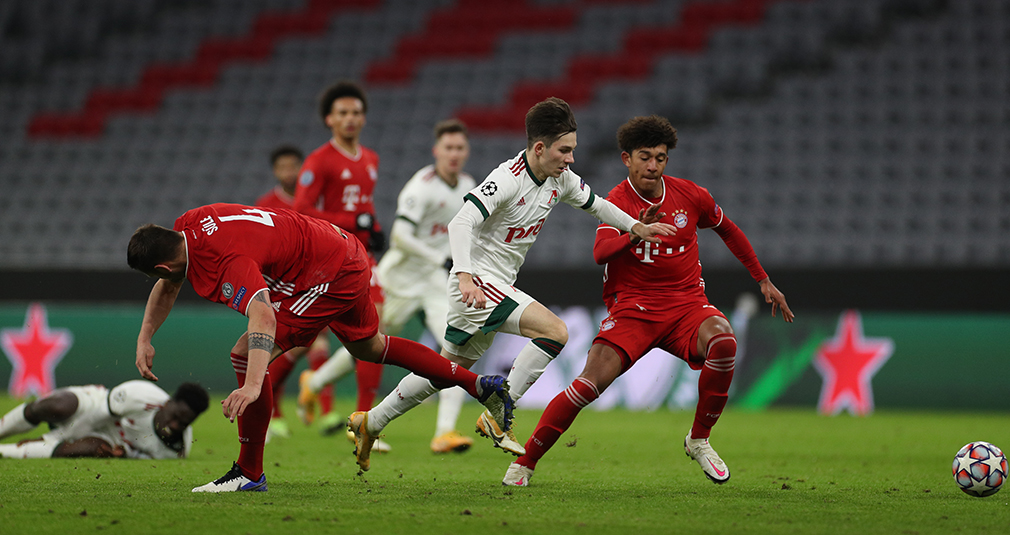 Before the match with Bayern, Lokomotiv had unprecedented problems with the squad. Almost everyone who was available came on the pitch, with only five players remaining on bench: goalkeepers Savin and Kochenkov, defenders Lystsov and Silyanov, midfielder Iosifov. At the same time, Lokomotiv had to win in order to have a European spring, but the task was almost impossible, as Bayern haven’t lost to anyone at home this season.

Even though Bayern have already guaranteed the first place in the group, the German team didn’t take this game lightly and put out almost the strongest squad. Alaba, Martinez, Lewandowski, Kimmich and Tolisso missed the game, but Neuer, Alphonso Davies, Goretzka, Sane, Muller, Douglas Costa and other stars started the game. In addition, Bayern had Gnabry and Coman available on the bench, the players that could come in and help in case something goes wrong.

Bayern as the host immediately took the ball and pushed our team to the penalty area. However, in the first half the Germans did not know what to do with Lokomotiv’s tight defence. Our players protected each other on the wings, won almost all air duels in the penalty area, and played carefully in the in front of the penalty area, not allowing the opponent to shoot from medium distances.

In 45 minutes, Bayern created two dangerous chances. In the middle of the half, Douglas Costa tried to curl the ball into the far corner - Guilherme read the episode. At the end of the half, Müller was left alone in the penalty area - his shot went near the post.

At the same time, one can not say that Lokomotiv only defended. The railroad workers regularly counterattacked and could have scored. First, Rybchinskiy found space and made a through ball to Rybus, who burst into the penalty area - Neuer made a save. Shortly afterwards Anton made a low cross into the box, the ball reached Eder, the Portuguese rolled the ball to Kamano and Francois shot - the defender made a perfect block to deny our goal.

In the second half, Bayern brought Gnabry on the pitch and increased the pressure on our goal. Lokomotiv held on, Guilherme pulled out two dead balls - first, Choupo-Moting tried to finish from a close range and a few minutes later Leroy hit without interference from the edge of the box, both times Marinato reacted.

Nevertheless, in the 64th minute, Bayern found their chance. Süle won the air duel after a corner and hammered the ball into the back of the net.

Lokomotiv did not give up - Rybus had a chance from a free kick, but his shot went near the post, and later Corluka got on the end of Miranchuk's cross, but Neuer was at the right place and saved the shot.

In the 75th minute Nikita Iosifov came on the pitch and straight away he became an offensive threat. In one of the episodes, he dribbled past the defenders and ended up one on one with the keeper - Neuer rescued Bayern.

Bayern scored the second goal in the 81st minute. Sane and Gnabry put Choupo-Moting into a good position - the striker hammered the ball into the net from five meters.

At the end of the match Nikolic gave some playing time to another young player. Aleksandr Silyanov made his debut for Lokomotiv.

Lokomotiv could not pull a miracle and remained in fourth place in the group. Nevertheless, it was a worthy European campaign.