A night to forget! Lokomotiv lost to Salzburg 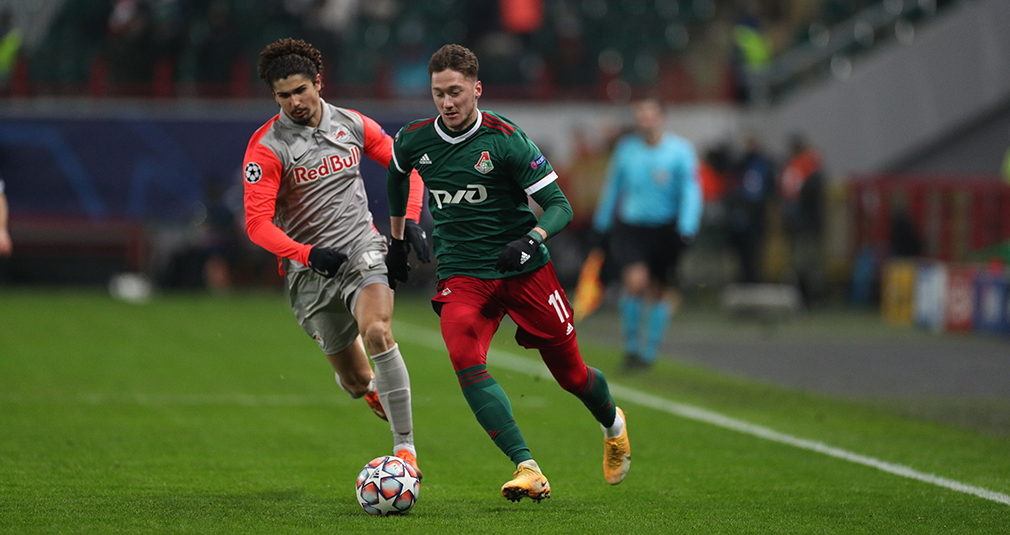 Before the most important match of this year, Lokomotiv lost two leaders. Krychowiak and Kulikov passed dubious tests for coronavirus. As a result, the lineup that came out for the match shocked everyone: seven nominal defenders, one midfielder and three forwards. It is clear that there could not be a 6-1-3 formation, so before the start of the match one could only guess what the real formation is.

The real formation was as follows: the three central defenders were Corluka, Rajkovic and Lystsov, Murilo and Magkeev played as central defensive midfielders, Rybus and Zhivoglyadov were used as wing-backs, Lisakovich played behind the striker, Eder and Ze Luis up front.

During the opening minutes of the first half, the teams looked closely at each other and practically did not create chances. Lisakovich was trying to hold on to the ball near the penalty box, Salzburg tried to use quick counterattacks.

In the 19th minute, Salzburg combination play has led to their goal. Salzburg cut our defence with several passes and brought Berisha into a good position at the far post - he scored, but the goal was disallowed due to offside.

With each passing minute Salzburg looked more dangerous and it resulted in their goal in the 28th minute. Our defenders blocked the shots twice inside the penalty area, but at the end the ball bounced to Berisha, who finished his chance from a close range.

Lokomotiv could have scored an equaliser in the 39th minute. Eder passed the ball to the far post after a corner, where Murilo struck it with his head - two Salzburg defenders were able to clear the ball off goal line. Second later Ze Luis had a go from distance, but Stankovic coped with the shot.

Before the break, Lokomotiv conceded the second goal. Rajkovic carelessly knocked the ball into the center of the field, where Koita immediately picked it up and put Berisha one on one. The Salzburg forward scored his second goal.

During the break, Lokomotiv made three changes, switching to 4-4-2 formation. Lystsov, Rajkovic and Lisakovich left the pitch, while Mukhin, Ignatiev and Miranchuk entered the game. Nevertheless, Salzburg created the first chance in the second half - Koita got into a good position in the penalty area, but his shot went near the post.

Lokomotiv responded with two chances from Ze Luis. First, the forward closed in on Ignatiev's cross - defender saved the team, and shortly afterwards Ze shot from the edge of the box, but Stankovic saved the shot.

Lokomotiv got back in the game in the 78th minute. Ze Luis earned a penalty and Anton Miranchuk converted it. Nevertheless, after the ball went in, a little incident happened, as Stankovic refused to give up the ball. Four players got a yellow card for unsporting behaviour.

It seemed that the goal would give emotions and energy to score more goals, but a minute later the guests took advantage of our next mistake. Murilo lost the ball in the centre of the pitch, Adeyemi sprinted towards the goal, dribbled past Corluka and shot into the far corner - 1:3. There was neither time nor emotions to save the game.

In order to secure the third place in the group, Lokomotiv must beat Bayern away in the last round.