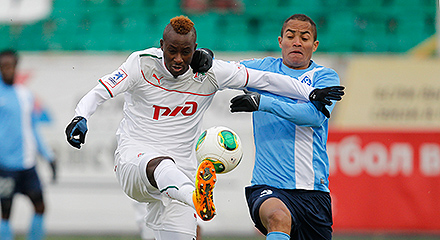 Lokomotiv claimed the ball under their control which made Kryliya's attacks quite a rare matter. In one of them Pavlenko tried his luck from a long range but missed the target.

The Railwaymen responded soon. First, Mbark Boussoufa saw Alexander Samedov in a perspective position and passed to him but Samedov got covered by the opponents. Then, N'Doye was strong in the air but the header sailed just over the crossbar. A minute later it was Samedov again but the defenders cleared the danger in the area.

Odd as it may be, the events started unfolding against the run of play. Corluka handplayed in the box and the referee was quick to issue a yellow card to the Croatian and a penalty. Kornilenko came to do the spot-kick. Abayev guessed the direction but didn't reach the ball.

Down 0:1 Lokomotiv reclaimed the ball again but couldn't capitalize on possession. Moreover, they missed a rapid counter attack where Kryliya doubled their lead. Kornilenko controlled the ball in the area and rifled, leaving Abayev gazing.

In the 42nd minute Maicon could have scored a late goal when Corluka managed a through pass. The Brazilian broke one-on-one but couldn't beat the keeper.

But just as the second half began, Lokomotiv demonstrated they were not going to take it. Jan Durica crossed into the area where goal-poacher Dame N'Doye drove it home first touch.

Here the Railwaymen besieged the hosts. In one episode Samedov tried his luck and it was close but the ball shook the crossbar. The next wave was effective: Boussoufa ran upfield and passed to Mikhalik who rounded Mukha and made the score level!

In the 76th minute Loko's manager thought it was time to fuel up the team. Freshman Felipe Caicedo got himself busy right away: the forward crossed to Maicon who ran in the box and centered but N'Doye lacked just a fraction to send it home. A couple of minutes later Maicon set up for Caicedo but the Ecuadorian couldn't strike properly.

At the death of the full-time N'Doye ran upwards and passed to Felipe but a defender managed to clear it.

Lokomotiv continued building up pressure at Kryliya Sovetov's goal but missed a counterattack which was broken by Mikhalik. The Ukrainian fouled on Adzhindzhal, saw a second yellow card and was ejected.

After the discouraging first half the Railwaymen managed to get back in the game and claimed a point in Samara.