Player of the Month: Dmitry Tarasov! 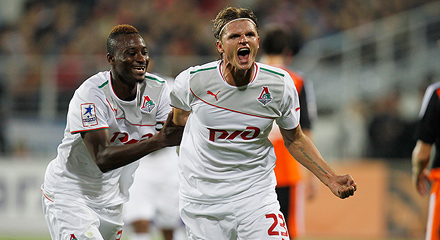 Lokomotiv's fans have chosen the Player of the Month. This time the award goes to Dmitry Tarasov who was a real engine of the team in September and scored two goals.

The voting was held on a VKontakte page, where Dmitry received 2524 votes. His closest "foes" were Mbark Boussoufa with 1485 votes and goalkeeper Ilya Abayev with 1428 votes.

Dmitry receives this award for the second time. Very soon he will be given the prize at the Lokomotiv Museum. The right to give the prize will go to the fan who wins the competition on Loko's pages in the social networks. The information about the exact date of the presentation of the reward will be given on our web site later.