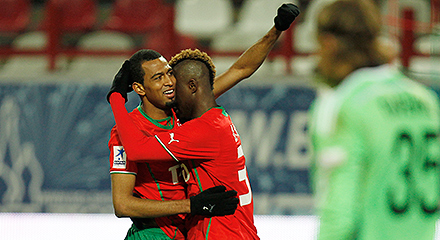 When Lokomotiv's lineup was made public, it came as a surprise for many that Leonid Kuchuk preferred the long-sidelined goalkeeper Guilherme and the young skipper Aleksey Miranchuk. The two got into the starting list first time in more than eight months.

With the starting whistle, the hosts got straight to the business. Renat Yanbayev steamed down the flank, entered the box and crossed to N'Doye. The Senegalese worked the ball and shot but the visitors' keeper Pareiko stopped it.

Volga then managed to push the play off their goal and even earned a couple of corners. Lokomotiv responded with Maicon's attempts but on the whole neither of the teams really threatened the other.

But as the period was half-way through, there came a turning point. First, Vedran Corluka dispatched a long pass to Dame N'Doye who broke one-on-one but was inaccurate on the final stage. Just five minutes later defender Polcak tried to cover the bouncing ball but N'Doye's speed, athletism and strong positional play allowed him to win it. The Senegalese would have broken one-on-one but Polchak pulled him down. The referee made himself clear with a direct red card what left Volga outnumbered. Lokomotiv were given a free kick but Aleksandr Samedov missed the target.

Anyway, the opener was soon scored. The high-speed Maicon carried the ball into the box past two defenders when one of them, Kowalcik, tripped him badly. The defender was issued a warning and Lokomotiv was handed a spot-kick. Samedov blasted and despite Pareiko guessed the direction he couldn't stop it.

The disorganised Volga pulled back to their goal giving the initiative away, but Lokomotiv failed to capitalize on it. Jan Durica headed goalwards but the ball went higher. Then Miranchuk passed to Yanbayev who broke into the box and took a shot that shook a post but did not invest into the score.

Late into the half Maicon could have scored the most spectacular goal of the Gameweek. The Brazilian managed an effective bicycle-kick but Pareiko tipped it away from the very corner.

After the half-time, the Railwaymen came out of their dressing-room even more charged for victory and rushed forward to improve the lead. Miranchuk started an offensive carrying the ball up the centre and passing to Samedov who proved to be a perfect assistant when Maicon finished his pass with a stunning first-touch kick. The score was doubled.

And again, then came the still. The short-handed Volga were unwilling to concede more while Lokomotiv were all satisfied with a comfortable lead. All but one man - N'Doye. The Senegalese was not going to leave the pitch with no goals scored, so when he received a piercing pass from Maicon and shook off the marker and was one-on-one with Pareiko, he made no mistake and took a classy shot at the goal just past the keeper. The score was set.

Roman Pavlyuchenko who filled N'Doye's position could have made the score totally indecent when Magomed Ozdoyev managed to find him with a pass. Alas, Pareiko made a last-moment save clearing the ball away.

Soon Magomed himself had a chance. Vitaliy Denisov crossed to the box, Pavlyuchenko didn't reach the ball but Magomed picked it up and blasted but the defenders managed to block it and clear.

The Red-Greens have secured a fifth big win this season that took them to the first line again, with Zenit one point behind.