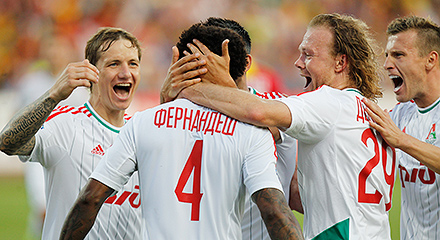 On Sunday, Lokomotiv hit the road to test the League newcomers FC Arsenal Tula who were charged up and ready to face the Railwaymen. The Red-Greens' Vedran Corluka and Aleksandr Samedov were back in the starting list, replacing Nemanja Pejcinovic and Sergey Tkachyov who had played a week before. Roman Pavlyuchenko also started instead of Dame N'Doye.

The game began pretty merrily although no dangers arose for some time. Only in the 14th minute did the first chance come up when Maloyan threatened Guilherme's goal but the cap gave no reason to worry about his skills. Soon the Brazilian showed off his perfect reflexes again when he saved once more. The Gunners demonstrated they love attacking and don't park the bus.

Lokomotiv responded in the 20th minute when Renat Yanbayev crossed to Maicon in the penalty area. The forward passed further to Pavlyuchenko who was quick to strike but Filimonov saved.

Moments later Samedov broke away down the centre and passed to the right flank where Manuel Fernandes worked it and took a shot at the far corner but missed just a centimeter.

The Railwaymen kept attacking and organized another perspective offensive in the 29th minute: Vitaliy Denisov produced a marvelous cross to the all-alone Dmitriy Tarasov who reached out but failed to touch the ball.

Lokomotiv summer signing Fernandes demonstrated outstanding play, and kept setting up for the teammates. In one episode, the midfielder's pass found Samedov who foxed a defender and blasted but his try went over the crossbar.

In the second half Arsenal started playing roughly which resulted in several fouls and Tarasov's busted lip. Lokomotiv responded correctly, scoring a cracker. Yanbayev passed to Fernandes who perfectly executed a technically difficult bicycle kick sending the ball to the far low corner with no chances for the keeper.

Minutes later Maicon should have scored. Samedov carried the ball and passed to the Brazilian who rammed into the box and had a go at the goal but Filimonov was smarter. Soon freshman Dame N'Doye tried his luck and again Filimonov saved.

In the very end of the game Lokomotiv doubled the lead. Guilherme started a counter-attack with a kick that put Baye Oumar Niasse in a favourable position. The Senegalese ran away from the defenders and centered to his countryman N'Doye who made no mistake this time.

Lokomotiv kept their goal intact and secured their first victory of the season.