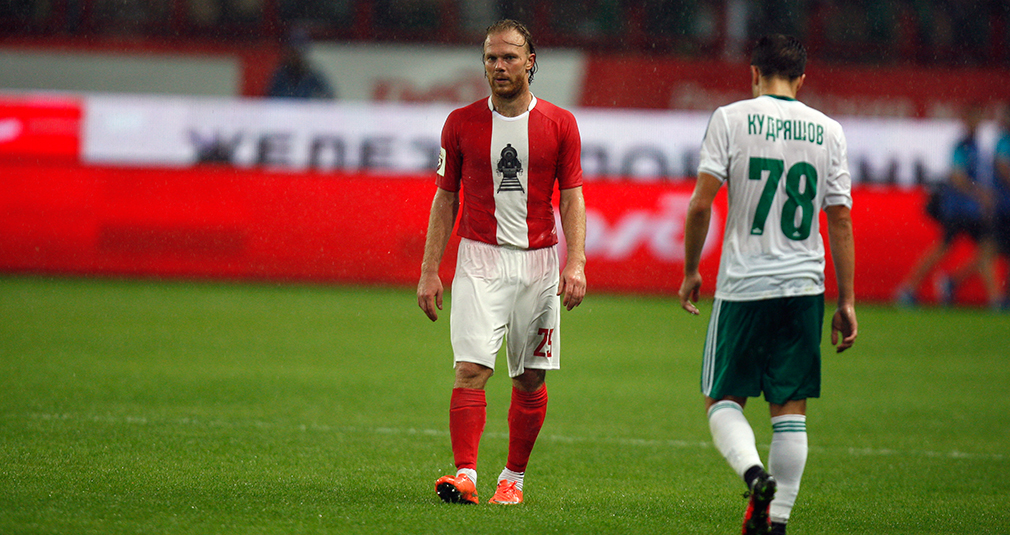 Lokomotiv tied the game against Tom in Gameweek 2 of the ROSSGOSTRAKH Russian Championship.

Lokomotiv were to play the season's home opener against FC Tom. This 7th day of August was noteworthy for a number of reasons: the Railway Workers’ professional holiday, Aleksander Samedov’s 200thappearance for Lokomotiv and Anton Kochenkov return to Cherkizovo. Our team took to the pitch in a new kit replicating the look of the one Lokomotiv wore back in 1936.

It was the same design in which Lokomotiv landed their first-ever big prize, lifting the Soviet Cup. And it is not a one-day anniversary. We are going to celebrate the 80 years since the first trophy for the rest of August...

There was a symbolic coin toss at the centre spot, witnessed by Valentin Viktorovich Lavrov and Viktor Nikolayevich Razumovskiy - sons of the Soviet Cup holders. Razumovskiy took the kick-off while Lavrov demonstrated some slick sleight of foot. Then the veterans went to the touchline where coaches Igor Cherevchenko and Oleg Pashinin greeted them and presented with number 80 retro-styled shirts.

In the first half Lokomotiv rose up to the occasion. The Railwaymen forced the rival deep on their third, spurned several chances and were awarded a penalty when Yablonsky brought down Miranchuk in the area. Skuletic made no mistake from the spot. After scoring a goal, he did not ease off. Had Kochenkov not saved twice, the Serbian international could have even notched a hat-trick.

Twenty minutes on, Lokomotiv were given another penalty. It was earned by Kasaev who ran down the wing dodging two players until he connected with Yablonsky’s knee. Samedov took the kick and scored as well to mark his day. In the very next attack Kasaev himself came close. He exchanged passes with Skuletic and shot from ten meters aiming for the far post but missed.

In the beginning of the second half, Lokomotiv could have made the score big. However, Samedov and Miranchuk wasted two opportunities. Tom, on the other hand, finally shifted up gear. First, Bicfalvi won an aerial struggle in our penalty box making his new club just one ball down. Ten minutes after him Pugin fired home from ten meters’ range.