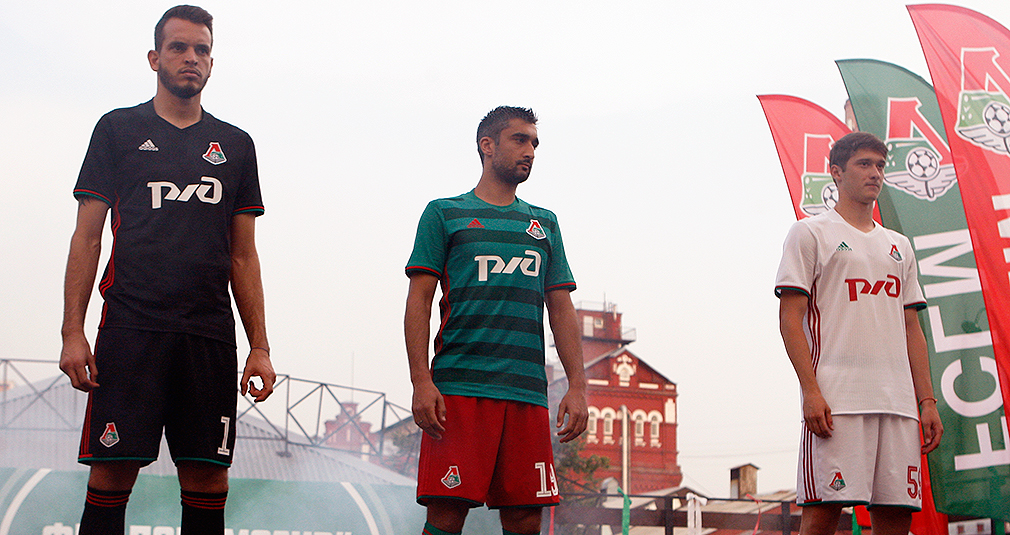 Last year our club unveiled the kits at the Railway museum. This time railroad pictures were replaced with cityscape views as seen from the roof of Moscow Distillery "Kristall". The event was attended by hundreds of fans, reporters and Lokomotiv legendary players.

The new kit launch opened with contests which even got a bit emotional at a point. Two young fans simultaneously answered a question, but the prize could only go to one. The other boy was on the verge of tears. Yet he kept a stiff upper lip and in a few minutes got something too – and strutted off to show his award to mom and dad.

Following the contest, the stage was given to footballers modelling the long-anticipated kits. Marinato Guilherme appeared donned in the black goalkeeper jersey. Aleksey Miranchuk came clad in white. Alexander Samedov sported the new season’s home kit featuring shades of green – for the first time in club history, by the way.

Alexander, who also collected his ‘Player of the Season’ award during the demonstration, said that the whole squad liked the green stripes: “Last season the green outfit was the team’s favourite. I like the kit. I think supporters like it, too. I'm thankful to them for the prize I have received as season’s best player. I do hope that in the new campaign we will win games to make our fans at the stands happy.”

Guilherme explained the technological side: “I do like the fabric of those new kits. It is very light. My primary outfit is black, the other one is blue. I have no preferences – usually, I just change them.”

The kits’ light weight was also noted by Alexey Miranchuk who said: “It seems that with each year our kits become lighter and comfier. When I was told what kind of fabrics they used to produce this one, my mind was boggled – it was all so advanced! ”

After sharing the impressions, it was time for gift-giving again. In the first place, Loko players handed new kits to those supporters who had attended all Lokomotiv matches last season - to Dmitriy and Regina Bashkin, Vladislav Anisimov and German Simonov.

When the main event was over, Marinato Guilherme and Aleksey Miranchuk went on to play foosball with fans, each of whom also got a new kit as a present. The floor was taken by our esteemed ‘railwaymen’.

“The lads should feel comfortable playing, - said Dmitriy Sennikov. – Quality comes before everything else. I asked around – the guys say the new jerseys fit well. I think the design has been improved. Just let it become our ‘lucky’ kit helping the team to win matches.”

“The kit is visually appealing, - Ruslan Pimenov supports his former teammate. – Maybe, the horizontal stripes will help the guys see each other better while on the pitch. What did we wear when I plied my trade? I did not examine my first Lokomotiv shirt. Putting on the Railroaders’ outfit was already a darling dream come true. A few seasons went by before I started paying attention. Loko kits have always been top-notch.”

“Wearing beautiful stripes inspires you to play beautifully, - adds Sarkis Oganesyan. – I like both outfits. The club has arranged a wonderful presentation. Back in my time the squads were just given match-day shirts. I believe supporters were happy to mix and mingle with the team today.”

When the last game of football was over, the team proceeded to signing autographs.

“It was the first time I saw our squad members so close, - says Olga Ignatchuk who is also one of Lokomotiv supporters. – My favourite is the black goalkeeper kit. That colour suits Guilherme. I hope Marinato will play in black till the end of the season. The green stripes and a green jersey sound cool! I think these kits look great!"