Lokomotiv Make It To Quarterfinal 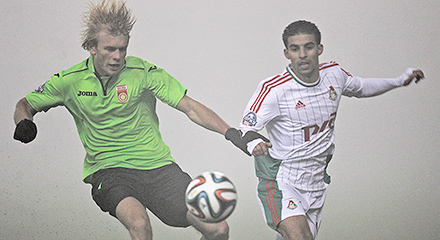 Soon after the Railwaymen's plane landed in Ufa, the team held an evening training session at Dinamo Stadium. Today the city got wrapped in a thick fog, so the game teams had to play resembled hide-and-seek.

Both Lokomotiv and Ufa took some time to get used to the unusual weather conditions. On 5 minutes the hosts played a promising free kick but the crossed ball slid off the attacker's head. Actually, both teams tried to capitalize on the crosses played to the box, and after their first well-directed attack Lokomotiv took the lead. Shishkin crossed to the box where Boussoufa headed in a cracker, left alone by the opposing team's players!

The Bashkirs rushed for a leveler, and kept playing crosses and long balls to Lokomotiv's area. On 33 minutes came the deadliest scoring opportunity when Handzic was ready to strike but Guilherme played effectively and saved.

Then the teams switched to short passes trying to keep the ball. The end of the first half turned hot when Ufa could have punished Loko for the mess they created in their own box, but fortunately for the Railwaymen the hosts didn't push it to the maximum.

The second half had the same tempo, and both teams produced only a handful of opportunities. On 72 minutes Ufa weaved a good combo on the right wing and crossed to the box where Akahosi had a chance, but failed. Five minutes later Fernandes found himself in the opposite box threatening the goal, but a defender was able to play back to his keeper.

The hosts' last chance came in the injury time. Lokomotiv was charged with a free kick not far from the goal, which attracted all the Ufa players. And they were close: a powerful strike shook the woodwork.

However, the score allowed Lokomotiv to advance to the next leg where they will play against the winner of the Rubin-Spartak fixture.