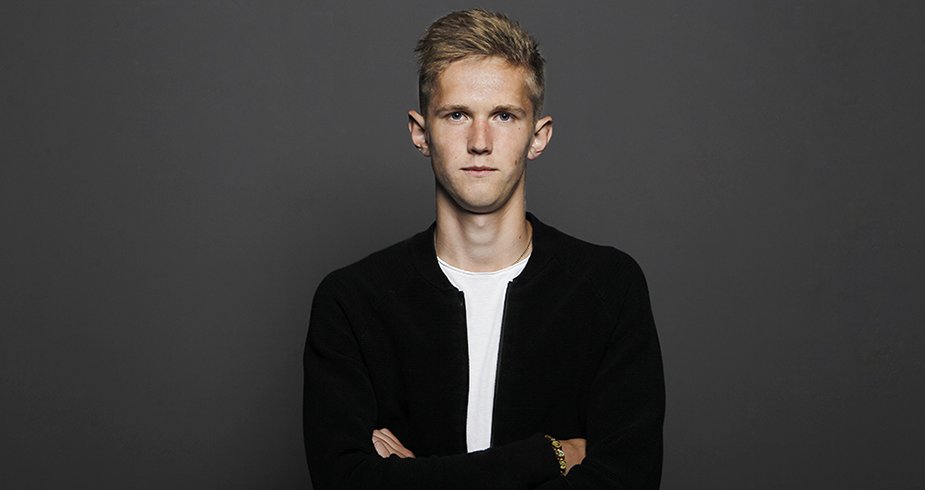 One of the most experienced junior squad members, Alexey Solovyov tells Our Loko about training with the main team, his debut appearance for the club, and what his dream girl is like.

- I remember you saying once, that all your peers want to get somewhere in life. What about you?

- I’d like to be with Lokomotiv main squad, in the first place. It is my childhood dream. Later, perhaps, I could signed with a European club. Why not?

- You’ve been with Lokomotiv for more than ten years already. How did it start?

My grandma brought me here when I was seven. By mere chance. At the time I was training in an amateur team near home. The father of a friend informed us Loko were going to hold trials for kids of my year of birth. He suggested I should try. I did. And I am still here.

- I suppose one may put it this way, yes. I live not far. Everything was just right.

- Have you learned Loko anthem by now?

- Sure. I know the anthem by heart! I sang along, when I came to the stadium as a boy to watch the team play - still remember all the words. It’s a must, in my mind. Being with the club for so long, I should know its anthem.

- Do you have any memories of those matches?

I remember us gathering as a team and going to the School Area. Only then it was located in the centre of the lower tier of the East Stand. I have a clear vision of the home match against Brondby. I even wanted to go home after the first half, when we were losing 0:2. Lucky I were not to do so! But when we were down 0:2, I was almost crazy: how come?!

- Did you have any idea that ten years later you could be among those who started matches, not watched them from the stands?

- No, honestly speaking. I was mesmerized with what happened in the pitch - enthralled, I looked at Loskov, Ivanovich, Pashinin… I did not imagine I would work with some of them. Now I realize how fabulous it is - being trained by your own idols. It’s a stimulus to develop. Considering how far they’ve come in football, you wish for a quick debut in the Premier League, eager to follow in their footsteps. When I review old matches, I see how awesome Oleg Alekseyevich is … Top-notch. We are so lucky he is with us!

- You seem to be a full-fledged patriot of the red-green team. Can you picture yourself in another club?

Well… It’s difficult because I’ve always been with Loko… But I believe I could deal with it. A professional footballer should be able to leave his old club to continue on his path. Everyone wants to play. If, for some reasons, I cannot do it with the Railroaders then… I’d rather not think about it. I work on and aspire…

- What do you think has been your primary achievement so far?

- At academy level me and my peers have achieved virtually everything. Things are going as planned. I hope that the next stage objective - the first team – is coming soon.

- But you have practiced with them already.

- I have. From the get-go it is totally overwhelming. You go in the dressing room and meet the masters standing there, guys who play at the national level… I was in a kind of daze even. Then you take to the field and suddenly it’s over. You are no longer panicked, not feeling coy. We are all alike: people with two arms and legs. The training pace is higher, but I am sure, with the right amount of practice one accommodates.

- How did you become a defender? Children always want to play at the attacking end.

- Indeed, they want and they do. I used to be a striker, too. At some point I was transformed into a midfielder and further on shifted to the centre back. In the final run, our former coach Oleg Habi decided that I’d better be a fullback and take part in both attack and defence. So I am quite satisfied with my assigned position.

- Do you remember your first match for the juniors?

- Yes, distinctly. It was a game with Krilya… Which season? 2012/13, I believe. Samara team were going third and the Railwaymen were following them. The managers gave me half an hour. The one thought revolving in my head was: “Gosh, yesterday I still played at school and suddenly I am in the field with the junior team.” I think I did well enough. An opposing team player even earned a red card for fouling on me.

- Do you feel as one of the leaders now?

- As an ‘elder’ of the youth squad, I sure do. I have to assume this role and help those who recently joined us. The old-timers Barinov, Makarov, Zhemaletdinov and I take the responsibility. Hope, we are doing fine.

- We saw you kick off the season with a new haircut. Did you do it for luck or to assert your leadership?

- You know, we follow fashion trends here, too, and develop styles (Laughing). I was willing to alter my looks a bit. I have an aunt who works as a hairdresser. It was her idea. She suggested we try something cool. We did. I like it, and so do other people.

- The most important thing is that your girl-friend approves.

- You missed. I have no girlfriend.

- Then you may well prepare yourself: once this interview comes out, your leaving Perovo after the match won’t be simple.

- You promise me a crowd? – Aleksey asks with a laugh. - OK – why not! Some want a footballer boyfriend, others have their sights on bankers. Everyone has it their way.

- In such a case, tell us now about Aleksey Solovyov’s ideal partner. Describe your dream girl.

- I cannot help but cast glances at your right arm: the tattoo on it.

- I have two. The first one was created in honour of my grandma, may she rest in peace. It was a sign of gratitude to her for everything. The other was made just for the beauty of it. I was attracted by Polynesian designs. Although, I never went as far as research the origin of those drawings. And I did not select anything with a symbolic meaning. What may be next? I consider yet another tattoo, but have not picked out the theme.

- I read on the Internet that you were an A-student. However, you don’t look like a studious swat.

- It’s true. I have only six B-grades in my school certificate. I have no idea how I managed that. The teachers were on my side, yes – occasionally, they were perhaps slightly more generous than they should have. But I applied myself, too, and did well at the exams. Think I deserved that. I was particularly good at English, my favourite subject. I won’t have problems communicating with players from other countries – just call! (Laughing)

- What is your most vivid school memory?

- The Farewell Bell ceremony, and the Prom - heavy-hearted memories, actually. I remember having the acute feeling of ‘it’s all over now’. All those years we had been playing and studying together were now gone… Some guys would give up football, some stayed. But that moment brought about serious life changes. In a way, it was a pleasant event, yet it left you missing people, most of whom you don’t usually see any more.

- Did you carry a bell-girl on your shoulder at the ceremony?

- We had no girls at school. It was a bell-boy. And he was not so little any more – it was a bit of a struggle for me. Normally, people carry around a chit of a girl from the first form, while I had a five-former sitting there.

- Can you name Loko players, who are your example from the professional point of view.

- I have always been impressed with what Vitaliy Denisov and Roma Shishkin do. Their styles differ, yet both have features that win me. Vitalik has enormous working capacity! He seems to be all around, the first in everything. He joins attacks often. I like his manner. Roma is an embodiment of the coolness, calmness and concentration.

- I noted for myself a while ago, that you and Vitaliy had similar styles of play.

- I’m fine as long as we don’t look similar – just kidding! In fact, I also like to support attacks. The only thing I am not particularly fond of is to clearing away. When you see members of the first squad perform this way, you immediately wish to emulate them. Then everything will turn out well!