Three Points In The Season's Best Game So Far 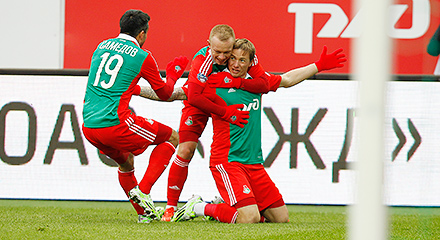 Miodrag Bozovic had played with his team's lineup again, trying to find a better balance. Unlike in the derby with Spartak, centre-back Vedran Corluka turned a regular spectator due to an excess of yellow cards, so his position was filled up by Nemanja Pejcinovic. Elsewhere, Alan Kasaev took the starting position instead of Maicon, Manuel Fernandes replaced Alexander Sheshukov, and Dame Ndoye spearheaded attacks instead of Niasse.

Lokomotiv started actively and soon reinforced their bid to win. The Railwaymen ran to counter-attack, Ndoye played one-two with Kasaev but couldn't reach the return pass.

The next episode could have ended in a goal. Alexander Samedov passed to Ndoye in the box but the Senegalese was knocked down in front of the area. Samedov took the kick himself, however, the ball came straight to Gabulov.

In the middle of the half it was the visitors' turn to attack. Yusupov sent a volley goalwards to shake the post. Valbuena picked the ball up and produced a second attempt but Ilya Abaev worked well and blocked it.

Late in the half, Lokomotiv suddenly found themselves on the losing side. Pressed by an attacker, defender Pejcinovic produced a rather weak pass to his keeper. Alexey Ionov of Dinamo intercepted it and broke one-on-one, making Abaev watch the ball crossing the goal line.

Just two minutes later the Railwaymen had a chance to equalize. Douglas fouled at Ndoye in the box, and the ref had little doubt about a spot kick. Mbark Boussoufa took up the responsibility and produced a precise strike but Gabulov guessed the direction and reached the ball.

Immediately after the restart, Lokomotiv faced another blow. In a rapid counter-attack Dinamo delivered the ball to the box where Dzsudzsak headed it into the back of the net, doubling the lead.

Soon Lokomotiv had a chance to respond, and did much better this time. Eight minutes later Kasaev worked the ball for his best leg and centered a low-flyer - just a real choice for Ndoye. The Senegalese dove down and headed it in!

Just a couple of minutes later the Railwaymen and the Policemen were level! Gabulov blocked Ndoye's header, then footed away Fernandes's attempt, but Samedov jumped out from behind a defender and hammered it in!

With 25 minutes still to go, Lokomotiv wanted to elaborate. In another episode, Samedov carried the ball up the centre and passed to Kasaev in the box. Alan's technique allowed to pass Hubocan and pierce Gabulov, putting Lokomotiv one goal up.

Ten minutes later Bozovic decided it was time for a double substitution. Maicon and Pavlyuchenko came out to boost pressure on the tired Dinamo defence. And this move proved effective! Five minutes before the final whistle, the Brazilian worked a long ball and headed it on to SuperPav who took his time to adjust for a side volley and drove in amazingly first time!

In what seems to be their best game of the season so far, Lokomotiv were able to break the run of play and produce an impressive comeback from 0:2 to 4:2!