More Emotions Off The Base 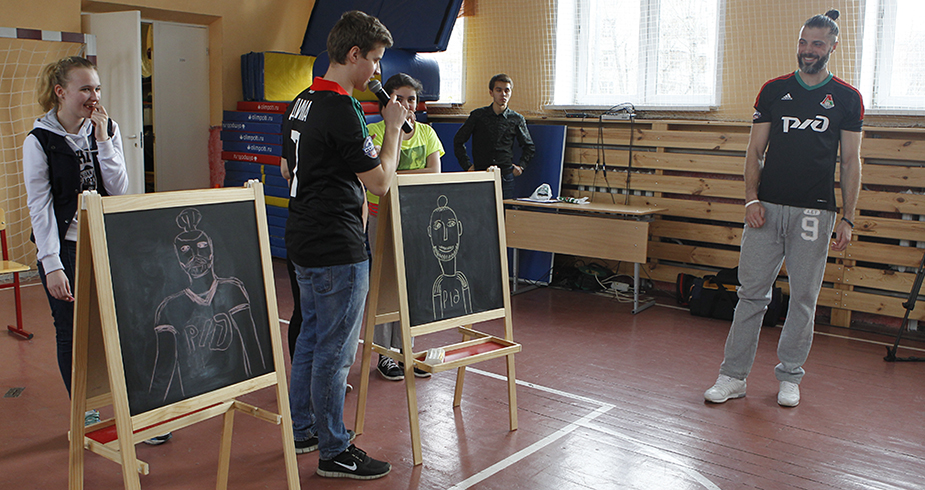 Lokomotiv are working hard to expand their fan crowd. This time goalkeeper Ilya Abaev and striker Denis Anisimov promoted their club at School 1349 in Moscow.

An extraordinary lesson began with a brief look back at the club's history that every real supporter must know. Boys and girls were excited to watch the documentary that highlighted the key milestones of Lokomotiv's development. After that, the host announced a lottery with prizes where everybody wanted to take part. The students broke into two teams, the Reds and the Greens, to contest souvenirs. In the end, everybody walked away with a prize.

- It was the first time I saw a real player so close, - said fifth-grader Sergey Yusipov. - The Lokomotiv Stadium is in my district and I support the Red-Greens. It's great that they often win and want to prove they are the best. I hope we will top the Russian League and get to the Champions' League.

Then the players came into the limelight: Denis Anisimov and Ilya Abaev demonstrated some skills, and let the students show their abilities. The boys did kick-ups and tried to score against Abaev, while girls tried to draw the players’ portraits. The two Railwaymen cheered up, shouting ‘C’mon! C’mon!’

Denis Anisimov was new to such an event, and he liked it: ‘It was great! When you see them smiling you start smiling yourself. I got in a tizzy before the beginning because I wanted to look okay. The students were happy, that means we worked well’.

Autographs and photo session crowned it all. Selfies and signatures counted in dozens, or probably hundreds. The Family Area mascot Rail was popular, too: the children didn’t trust him at first but soon he became part of the crowd. Some even asked how to follow him on social networks.

– I agreed to take part in this event straight away, - says Ilya Abaev. - The day was good: a had practice at Bakovka in the morning, and then another one here. I tried to demonstrate and explain how to handle the ball. Some guys have good abilities, really! When I was a kid and trained at the Chertanovo School of Football, their famous alumni used to pay a visit. So I think these events are necessary to promote football and Lokomotiv’s brand in particular.

...We hope that good mood is here to stay, and Lokomotiv have recruited some more faithful fans!