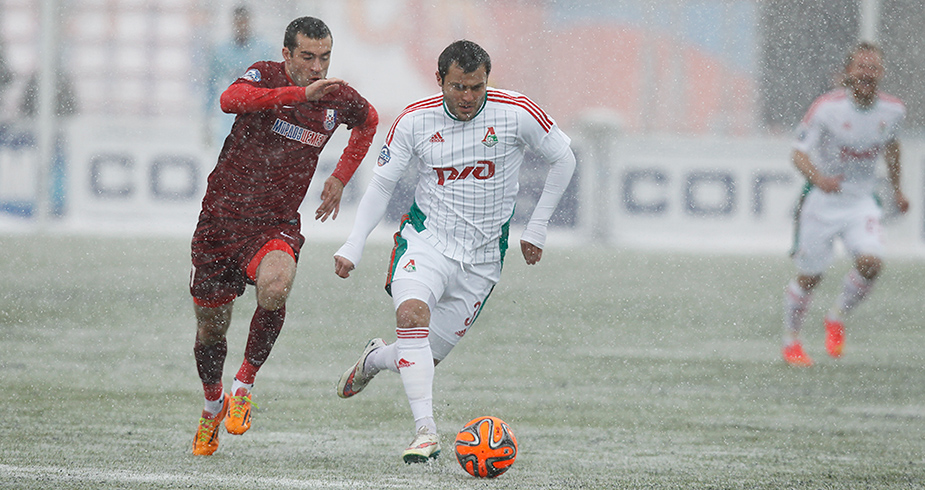 On the eve before the game the weather in Saransk turned really bad. The snowfall grew stronger, and the northern wind brought chill. However, it didn't confuse the Start Stadium staff who quickly did a clean-up of the local Astroturf pitch. The referees asked the teams to put on warm clothes, and the hosts brought a bright-orange ball.

The Railwaymen's starting lineup was a bit different from that for the Arsenal fixture. Left fullback Vitaliy Denisov replaced Renat Yanbaev, while defensive midfielders Tarasov and Mykhalyk were installed instead of Fernandes and Sheshukov.

It's hard to evaluate the first half in terms of scoring opportunities for the players had different objectives, the main of them was to adapt to the ice-covered plastic turf. A lot of tackles and the unpredictable ball behaviour resulted in six bookings. Taras Mykhalyk and Dmitriy Tarasov aggregated four cards each and which meant both would miss a derby against Dinamo.

During the first half, Lokomotiv tried to make use of positional attacks. Mbark Boussoufa came up low to pick the ball and to start offensives from the deep. Vedran Corluka tried to serve long balls to Petar Skuletic, and the duo Denisov - Kasaev tried to break through the left wing.

In such weather conditions, free kicks became increasingly important. Petar Skuletic tried to finish one off but the attempt was weak and Kochenkov had no problem dealing with it. Soon Samedov received a pass on the far post but the keeper timed his run well to block the attempt. The hosts had the biggest opportunity in the first half when their winter signing Yannick Djalo played a wall pass with Mukhametshin and drove the ball at the near corner but Guilherme heeled it! 0:0 after 45 minutes.

In half-time, the turf was cleared of the snow. Lokomotiv started the second half with a goal. Boussoufa saw space before Kasaev and passed, but the Ossetian should have timed his killer pass better. Instead it came up late when Skuletic had already been offside. The Serbian striker sent the ball home but the goal was cancelled.

Djalo still was the most active player at Mordovia. In one episode he shook off Roman Shishkin and headed but the attempt was inaccurate. Lokomotiv tried to capitalize on their players' height. Our defending midfielders had chances when Samedov and Shishkin crossed, but Mykhalyk's strike sailed over the crossbar while Tarasov's attempt was saved by Kochenkov.

On 73 minutes Alexander Samedov made a through pass to freshman Roman Pavlyuchenko. The sub made a great chip shot over Kochenkov but the ball went off the target. Lokomotiv dominated the field but couldn't convert it into anything dangerous until 86 minute. But then Samedov crossed to Pavlyuchenko whose strike was blocked and the bounce came to Fernandes who could have been accurate from his spot but wasn't.

It is symbolic that the stadium is located just next to a railroad track, and every passing train whistled as if calling the Railwaymen to push harder. However, a goal didn't happen, but Taras Mykhalyk saw a second yellow card for disrupting the opponents' attack.