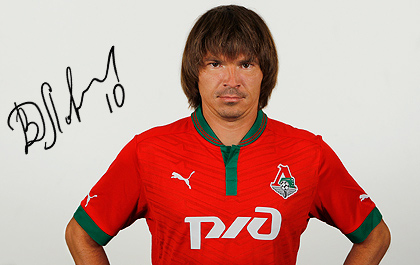 Dmitry Loskov was born on February 1974 in the Russian city of Kurgan. His mother was a secretary on a local factory, and his father worked as a director of the factory's gym. Dmitry says he loved football at school. In the 10th grade, football specialists advised him to develop his skills, supposing him to move either to Moscow, Volgograd or Rostov-on-Don. Dmitry chose the latter because his uncle lived there.

And there Dmitry made himself known as a professional player. After graduating from a local football academy, he debuted in the local "Rostselmash" club the following year. Five seasons on, Dima became a transfer goal for many top clubs but he chose Lokomotiv. And this choice proved crucial both for him and the club. It was Loskov who scored the only goal in the "golden" match against CSKA in 2002 that made Lokomotiv the Russian champion, first time in their history.

During ten years at Lokomotiv Loskov won many trophies. But, probably, his main achievment is the respect of his teammates who voted him their captain for many years in a row, and love of all Loko fans.

In 2007 Loskov signed a contract with FC Saturn, but for them he never managed to become half of the figure he was for Loko. After expiration of his three-year contract Loskov left the club as a free agent.

In July 2010, Loskov returned to Lokomotiv signing a 6-months agreement with the club, which has been constantly extended.