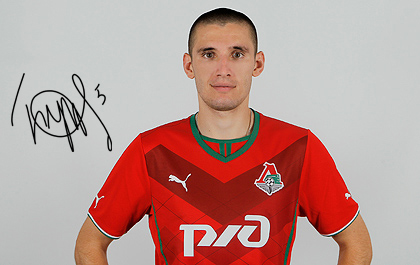 Taras Burlak started learning football in his home city of Vladivostok. Until the age of 13, he played in attack but in the finals of the Leather Ball competition for young players, Taras made his debut as a central back. His performance there was noted not only by the organizers who awarded him the title of the tournament’s Best Player. The scouts of several Moscow clubs put him on their shopping lists, but Loko wanted him more than others and eventually Taras ended up at Lokomotiv Soccer Academy.

In 2007, in the mid-season, Taras was taken to the training camp of Lokomotiv youth team where he managed to establish himself as a regular starter. 22 gameweeks later, experts started saying Loko’s raising a perfect central back. Next year the young talent was given a chance for another level-up, but lost in a competition against the main team backs.

In 2010, on loan to FC Volga, half a year later Taras returned to Lokomotiv and was taken to the training camp with the main squad. This time he was mature enough to use the chance. Loko’s manager Yuri Syomin felt he could rely on the guy and from then on, Taras became a part of the “main” Lokomotiv.